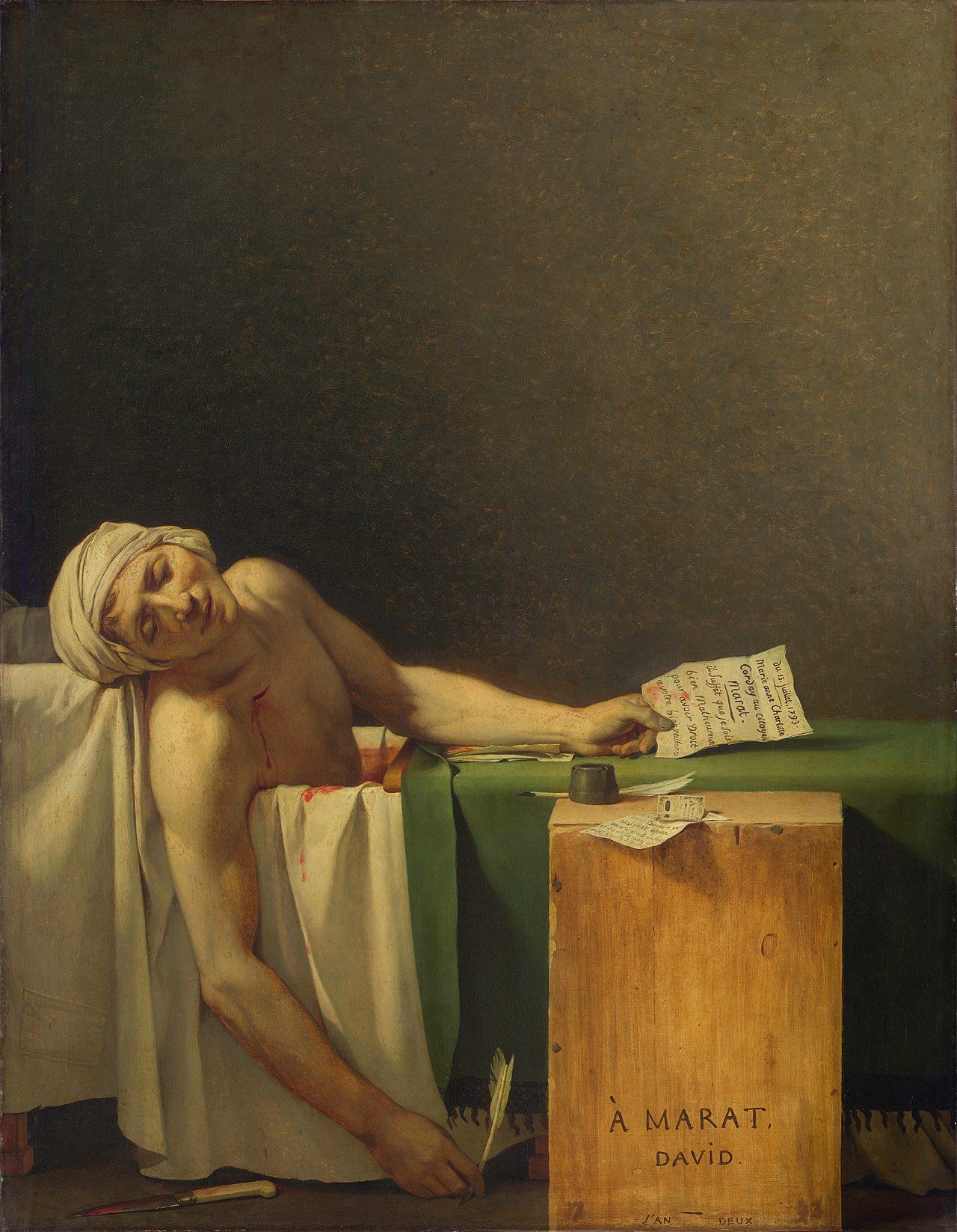 I will be comparing “The Death of Marat”, 1793 by David and “The 3rd of May 1808 in Madrid”, 1814-15 by Goya. Marat is shown as a new martyr by David. Martyr of the revolution who sacrificed his life for a great cause. We see an idealized image of David’s friend, Marat, the revolutionary publisher, lying dead in his medicinal bath with a piece of paper in handwritten by his murderer Charlotte Corday to gain entrance. She was guillotined after four days. We can see the wound on the right side of Marat’s chest and the knife which was used to stab him, on the bottom left corner of the canvas. The source of light is clear. It has a linear composition with absolute clarity on the subject. Here we have unity of light and multiplicity of detail. A lot of attention has been paid to the contours, the effects of light and dark. The anatomy, the muscles in the shoulder, collarbone, and arms. Marat got a skin condition therefore he had to stay in a medicinal bath for many hours a day. David didn’t show any skin blemishes or disease marks or a lot of blood in this portrait. Keeping Marat clean and pure. According to platonic philosophy when the body dies the soul, on the contrary, is free from the prison of the body and returns to ideas and rationality so death is seen as a positive end. The soul is immortal. David portrays a Christ-like figure in Marat. We see a wooden box used as a table for the inkwell. On the box, we see written ‘A Marat’ means ‘to Marat’ and David. At the bottom, we see Year two which means year two of the revolution. 1793 was the year of the terror, many were sent to the guillotine, many were considered traitors. Marat’s writings played a pivotal role in ending many lives. The revolution was anti-catholic and anti-monarchy. A lot was being changed to the new ideas including the calendar and the metric system. Here David portrays Marat as a common man with no luxuries, gold or expensive furniture and ornaments. The canvas above Marat is dark, plain and simple which brings more attention towards the subject and also confirms that Marat was a man who did not only aggressively and viciously promoted but himself followed the republican ideals of the revolution. 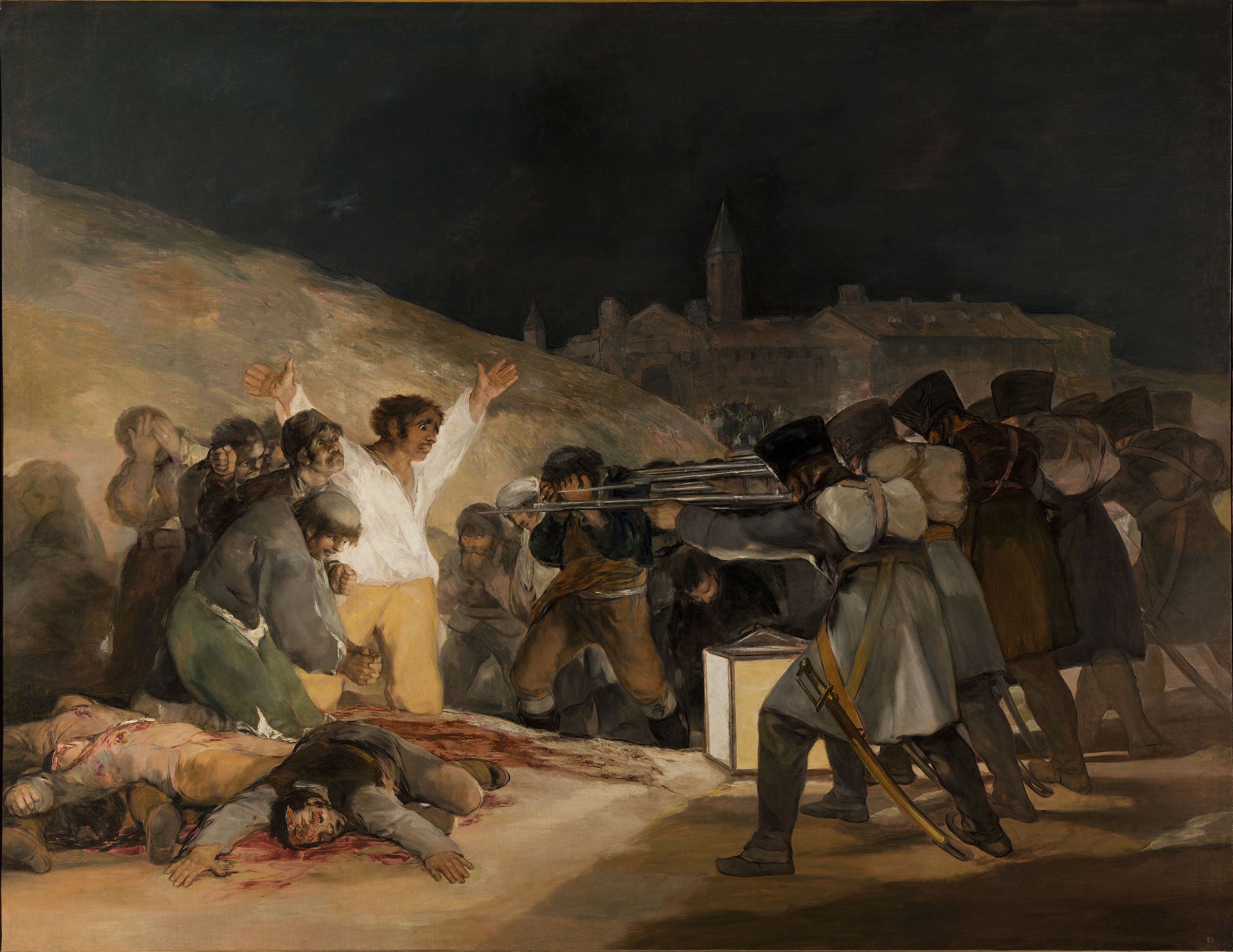 The 3rd may 1808 in Madrid by Goya is a documentation of events that took place in Madrid when the French army invaded Spain and occupied the capital city, Madrid. The image portrays executions taking place. It is an anti-classical, painterly and open composition with relative detail. Compared to the Rococo style that pleases the viewer here Goya is shocking the viewer. We see a row of French soldiers pointing their guns towards terrified and empty-handed people. We see dead people on the ground with fresh blood all around them. There are many others in line who are next. They are covering their face with their hands to not see their fellow citizens getting killed or the fear of being the next victim. It shows an endless row of people that were in line to get executed. The big lantern on the ground sheds a bright light on the victims. There is darkness in the background of the royal palace. Under the dark sky, we see this dreadful scene happening against a hill. We see a man with a white shirt raising his hands wide open towards the sky and eyes wide open as if asking what has he done to deserve all this brutality. It also signifies Christ being crucified on the cross. The victim’s right hand shows a stigmata, referencing the marks made on Christ's body during the crucifixion. We see people in anger, people frightened, covering their eyes and starring. The innocent were being killed by the Napoleon army as reprisals and a warning. A day before on May 2nd the people of Spain retaliated against the French army. Through this brutality they were being told that if you will retaliate then you will suffer. This didn’t deter the Spanish because there was long warfare resistance. This painting is not idealized, it has relative clarity. We can see the brushwork. In classical idealization, you don’t show corpses, no violence or death, just a little bit in the foreground. Here Goya is showing the bodies of executed without editing. The firing people are treated differently as an efficient row of killers, stripped of humanity, brutal killing machines, systemised and ordered. Victims are anonymous. The viewpoint is more straight ahead. Goya placed the viewer as the witness, front and center, there is a documentary quality as though the viewer is present on the scene, astonished, horrified and angry that this took place. As a viewer one cannot be present as a bystander, they would eventually condemn it.

Both the artworks represent a real historic event. David rooted in classicism and didacticism seeks to teach the viewer a lesson of greatest virtue. His images glorify the subject as righteous and worthy to be followed as an example for others. He draws most narratives from ancient Roman history where sacrificing your own life for the city and state is considered virtuous and is worthy of praise and appreciation. Here David is doing exactly the same with Marat. He is uplifting him to the level of a saint and a savior who devoted his life to the ideals of the revolution. His skin is clear, his body seems to be in a healthy and good shape, which probably is not entirely true at all. Whereas Goya completely negates and abolishes the idea of classicism. He is showing blood, dead bodies, fear, pain and suffering of his people who went through the painful experience of death under the sword of unchecked power. He is idealising neither the french soldiers nor the victims, he is providing a grim picture of the event that took place in Spain when the Spanish people were brutally murdered by French soldiers for standing up against them taking over without any approval. The style of painting is in complete contrast with one another. Goya is more painterly, there is relative clarity, it is an open composition. The light is brighter on the victims and we see dark shadows behind the french soldiers showcasing the victim and the oppressor, stripped of any human emotion. Whereas David showcases absolute clarity of detail, strongly represents the light source and subsequent shadows, confirms to the classic antiquity, it is a closed composition, planar space, and a linear representation. David and Goya both enjoyed royal patronage. They were able to reinvent themselves many times. Goya was in favor of Napoleon but when he saw the massacre of his people his views changed and deeply affected Goya personally and professionally. Both painters treated bodies differently. David drew bodies based on racial perfection, mostly white, caucasian. Males were shown active and strong, whereas females were shown passive and weak. Goya does not idealize bodies, he paints what he experiences. His ultimate goal is to show the reality. He does not follow any ideal that gets in the way of presenting human emotions.