The Sleep of Reason Produces Monsters by Goya (1799)

This painting refuses to follow classical idealization. It is painterly with relative clarity and detail. The objects are not presented in perfect, harmonious proportions. The purpose here is not to achieve idealization but to value human emotion and imagination.

The image portrays a dream-like environment where the artist himself is resting his arms and head on his desk surrounded by visually threatening bats, owls, and a cat. The lynx on the right mimics the artist’s posture, but in contrast, it is widely awake and vigilant against the monsters. The cat is a predatory symbol of the night, owls are a symbol of folly, and bats are a symbol of ignorance. Goya is dressed like an aristocrat, suggesting that he is an enlightenment intellectual. The artist or the writer is shown so wholly lost in his ideas and ideals that he is not aware of reality anymore. (Ciofalo, 426)

Goya here is exploring the world of fantasy to find the ultimate truth. He is arguing that reason should be the main ingredient in any endeavor. Here he is also criticizing the clergy and the people in power who executed or imprisoned the voices of reason. As defined by Goya himself in another handwritten commentary, “Abandoned by reason, fantasy produces impossible monsters. United to reason, fantasy is the mother of the arts and the source of marvels” (Moffitt, 1-2) 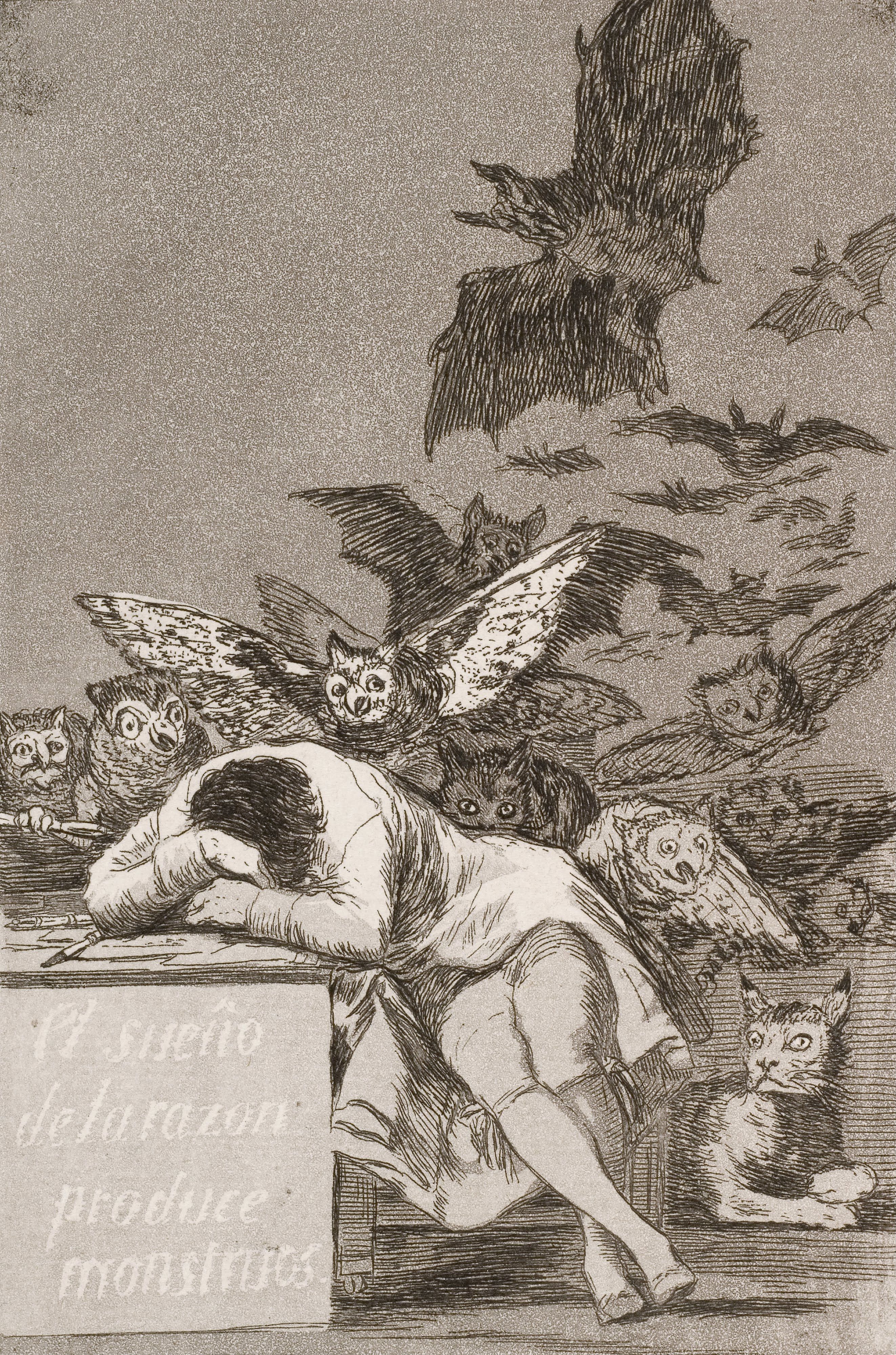 Goya believed in invention and creativity, not so much in convention and tradition. We can safely say this because Goya himself in his announcement for the Caprichos in the Diario de Madrid on the 6th February 1799 (“inventadas y grabadas al agua fuerte por Don Francisco Goya [invented and engraved in aquatint by Don Francisco Goya]”). His commitment to creativity and artistic expression also comes forth in his speech after he was appointed as the director at the Royal Academy of San Fernando in 1795, where we famously proclaimed that (“there are no rules in painting. It is less important to adhere to convention  than to recognize talent and to allow it to flourish freely, to reward and protect he who excels [in the arts]; to hold in esteem the true artist, to allow free reign to the genius of students who wish to learn them, without oppression, nor the imposition of methods”) (Cascardi, 2)

The French revolution started in 1789. About nine years before these paintings were made. What took place in France at that time was chaos and bloodshed. Louis XVI was funding the American revolution and spent frivolously on clothing and his family’s luxurious and lavish lifestyle, while the people of France were dying of starvation. Due to poverty and socio-political unrest, the elite started demanding a constitutional monarchy and the Jacobins demanded a republic. The revolution began and the Jacobins after not being taken seriously by the national assembly revolted and were ordered to be shot down by the National Assembly. Around fifty of the Jacobins died. Meanwhile, Louis XVI along with the national assembly planned to take over Austria to steal food and wealth. Austria and Prussia, in turn, united against France. However, Louis XVI conspired against the revolution and encouraged Prussia to take over France. The National assembly found out the conspiracy and suspended the monarchy and by a voting system formed a republican constitution. The guillotine, an instrument of the revolution was introduced for a swift and supposedly painless death. More than 16000 people were guillotined who were considered the enemies of the revolution including Louis XVI and Queen Marie Antoinette. The revolution also killed a lot of fellow revolutionaries. It was termed as the Regin of terror. The calendars were redesigned, metric systems were standardized and everything that was based on religion and monarchy was supposedly replaced with rationality and reason. The republican constitution was revised again and during the wars, with Prussia and Austria, a new hero was emerging among the ranks known as Napoleon Bonaparte. In 1799 Napoleon was established as the first consul of France. What followed was a new absolutist regime that promoted violence, human suffering and propaganda through art. Goya, in the beginning, was in favor of the revolution, being completely deaf at this point, he was the director of the Royal Academy of San Fernando. He started working on the Caprichos in parallel with official commissions of portraits and religious paintings including the Duchess of Alba, Queen Maria Luisa on Horseback and more. After 1972 his paintings such as Yard with lunatics, Prison interior and the Madhouse portray his affinity towards the vulnerable and forgotten people of the society. He started expressing the misery and suffering of people in contrast to the celebrated idealism and societal norms that didn’t allow free expression.

Religion became merely a performance, the church just became a tool for corruption and undue influence. The melancholic and dark nature of the picture signals the belief in witchcraft in the eighteenth century. Many children did not survive in their early years and would die of disease or illness. Mothers during pregnancies were also at greater risk as compared to today. Therefore a lot was unknown about what changes take place in the human body that leads to so many deaths. The belief in witchcraft and demons would have been the way to satisfy this tragedy of losing loved ones. Although in the late eighteenth century, the age of enlightenment, when these paintings were made the inquisitors and philosophers had virtually denied the existence of witchcraft or demons and the prosecution of alleged witches was also brought down to a bare minimum. Therefore Goya’s Caprichos were received and conceived as a work of pure fiction (Tal, 33). Commercially not a big success as the paintings were dark, gloomy, melancholic and not appealing to the senses of people who were used to an era of paintings in which objects were idealized. No grotesque or human vulnerability was shown. No demons, monsters, blood, killing or human suffering and emotions were portrayed to bring forth the reality of people suffering the atrocities committed by the church and the aristocracy. Goya later painted a series that highlighted the horrors of war. It had Intense imagery with violence and irrationality that seem to match catastrophic social upheavals of the time. The work was small and private. It was about disasters in the wrong places. Religious craziness, orgiastic ceremonies, witchcraft.

Goya worked for the church and then was enjoying his life as a court painter in Madrid working for the top people when a severe illness struck him in 1792 that led him to vertigo, nausea, blindness, noises in the head and deafness. He developed tinnitus, which meant he had to suffer through the continuous ringing in his ears. The rest he recovered from, but Goya was stone deaf for the rest of his life. This suffering and disability changed his life dramatically. He was not able to communicate with anyone, no discussions, minimal human contact. His paintings became dark, and he showed prisons, madhouses where people were kept away from society without treatment and were considered useless. He feared to end up in those places himself. Therefore to keep his sanity Goya was now exploring a different world. With no contact with the people outside Goya started exploring himself. His fears, his imagination. His solitude made room for observation. On the other hand, it liberated him into the topographer of the inner self. Everything had to do with hallucination, madness, craziness, and fear. He wants the viewer to feel the same stimulation as imagination has prime importance in most of Goya’s art (Klein, 214). Goya is not afraid of challenging or questioning the viewer. His ultimate goal is to show the truth, the reality as it is with all its natural flaws, blemishes, and irregularities. In the “Sleep of Reason”, Goya is also proposing that imagination without reason can lead to madness; however, if reason does not let down its guard, imagination can bring creativity and artistic fulfillment. Therefore he is announcing that there is a price to be paid for being an artistic genius that might end up in madness if the reason is unable to restrain or tame that imagination. (Klein, 215)

The Caprichos series was published during the Spanish inquisition and french revolution. Goya was aware of the dangers of disagreeing with the politics of his country. However, his ultimate desire is to show the reality of his time through his art. Haunted by demons and monsters, he fears execution and revenge. The artist is already lying on his tools; the paper and paintbrush can be seen on the table. An owl can be seen delivering a paintbrush to the artist as if asking him to turn his imagination into images. In “Sleep of Reason” Goya is addressing the religious fraud, bizarre superstitions, and persecution of innocent citizens happening during his time. Goya might be saying that if we keep sleeping, our dreams and imaginations can lead us to foolishness and insanity, and therefore we must wake up to reality and find our way back. Therefore the “romantic ideal” of Goya during the dark time, in this painting in his own words, is evident, and that is to banish harmful, vulgar belief and to perpetuate the solid testimony of truth (Moffitt, 36). 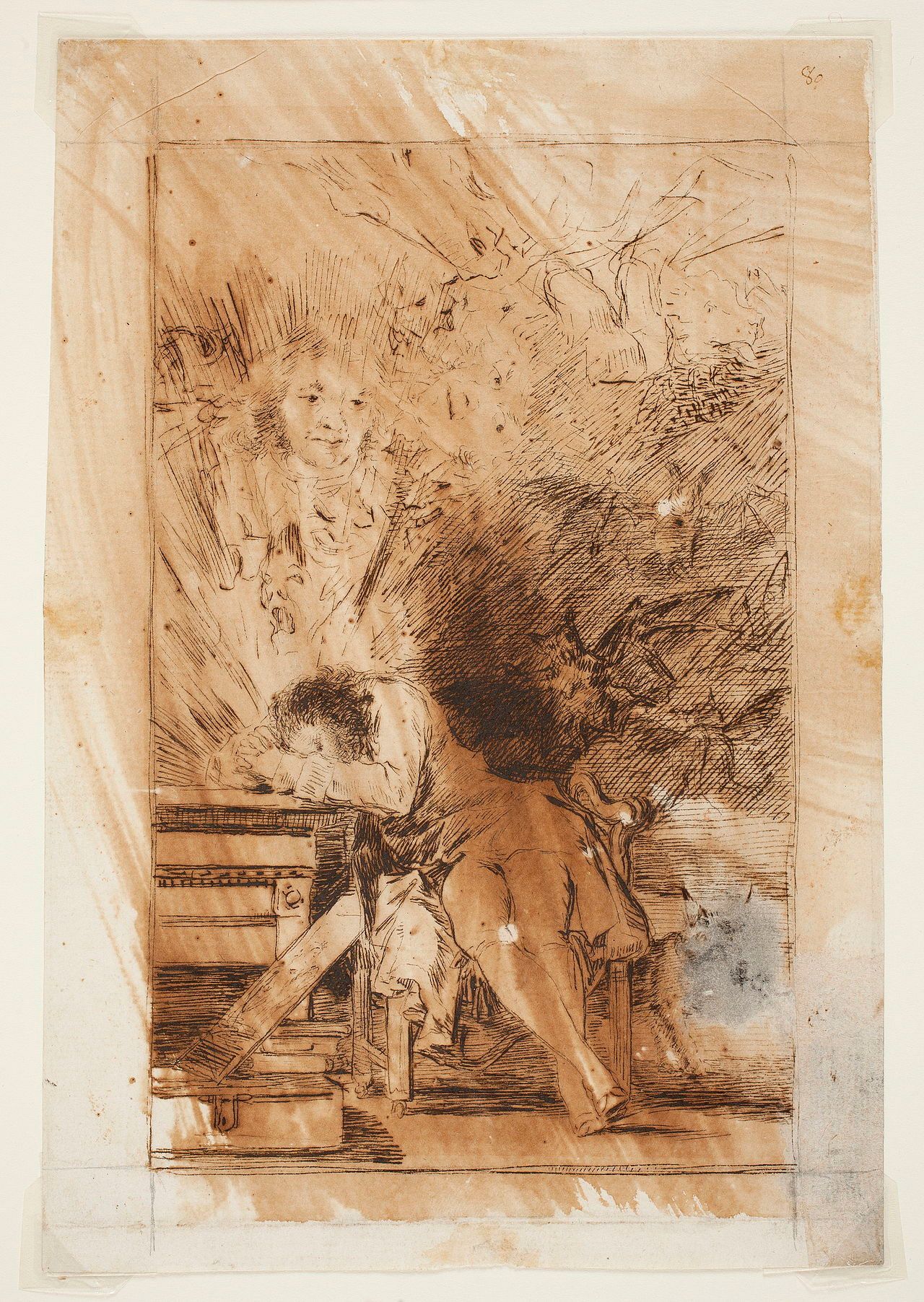 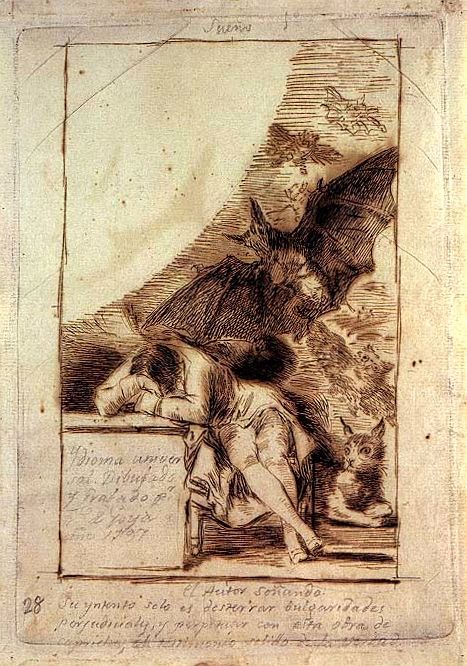 Figure 2 and 3, Francisco Goya, Design for a Frontispiece to a set Suenos, Drawing 1797.

Goya initially intended a frontispiece for his 1799 publication of Los Caprichos. Instead, he used a self-portrait. He made preparatory sketches for almost all the work in Los Caprichos. In Figure 3 we see Goya sleeping on his desk, a painting box, a pile of books, light emerging from his head, Goya’s own face emerging among the creatures of the night, awake and watching himself sleeping. In the second version in Figure 3, we see Goya has cleaned away the visual chaos of his dream with a smooth curve. Here Goya has almost completely removed his personal belongings, we don’t see the painting box, books, Goya’s face. In other words, Goya wants the viewer to be able to relate him or herself to the person sleeping (Ciofalo, 6).

Goya has faith in nature. He shows what makes humans equal and universal. He does not give any individual in the society an edge over another in his paintings. His paintings for the king and his family show vivid design and colors on the dresses but the faces look completely natural as if they are normal human beings and not even slightly more intelligent than any other individual. He did not idealize his paintings. Still, the drama and expressiveness he showed in his work are still completely relatable to the common people and the elite. Goya wanted a good life, he wanted a property in the field. Away from the hustle-bustle of the city. He bought shares in the Bank of Spain. Started painting without commission to sell them freely. He started using the new technology at that time to enable himself to make more copies of his paintings. Financially, Goya wanted to be independent. He did a lot of commissioned and noncommissioned work for people he did not completely agree with. He went along with everyone. In his work, one can notice that he does not directly attack any particular person but gives hints and invites his viewers to have multiple interpretations of his work. He calls the viewer’s imagination to learn his perspective with a free and open mind. He invites the viewer's own imagination without critique and judgment.